Tonights class, we started off discussing how many ways we can be attacked in the street. We looked at the different scenarios that would make the attack different, the credibility of the attack vs the incredibility of the attack, if the attack was a primary or was it a secondary type of attack eg would a Judo type throw be a primary attack or a secondary attack - would a shove be a primary or secondary type of attack etc etc, and we looked at the commonality of attack eg a jumping spinning back kick may be someone's idea of a Primary Initial attack, but most street attacks DO NOT start that way!

If we understand what the most common close quarter assault are, we can base our self defence methods around that. Of course there is more to it that just that, we need to look at scenarios, we need train to learn the pre contact cues that gives away what the attacker intends to do.

Just by starting to demystify the attacks we are MOST likely to see on the street, empowers the self defence student more in 30 minutes than  maybe months or even years of just physically learning attack specific  techniques...it seems simple.....because it is! 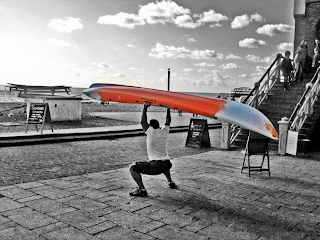 Today was a rest day for me, apart form teaching tonight, but while I was at the beach, I got into a discussion about training for the unknown and unknowable....so I tried to Overhead Squat a Kayak...awkward...is probably the easiest way to explain it!